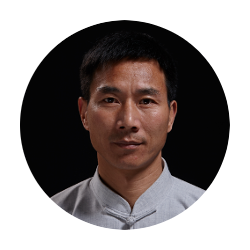 Chen Bing is an outstanding representative of the 20th generation Chen Taijiquan. At a relative “young” age of 35 in the world of Taijiquan and martial art, his fame extends many parts of China, Japan, Korea as well as U. S. In addition to his currently appointed position of headmaster, he also holds the following positions and associated responsibilities:

1999, he created Fudan University’s Chen-Style Taijiquan Association.
2000, he was invited to participate in the 1st International Qi Culture Festival at Seoul (Korea in May, 2006). And in November, he was invited back to Korea for three months teaching Taijiquan.
2001, he was invited to Japan for a month long Taijiquan instruction in July.
2002, May, as head coach, he brought the Henan Taijiquan Push Hand team to the National Wushu Competition and won two gold medals and a bronze medal.
2003,he accepted an offer from Bo-Chuan Chinese Medical University in Korea as a university lecturer.

In the same year he was honored by Henan Province as “Exceptional Kunfu Trainer.” 2004, he made multiple visits to US to teach Taijiquan and conducted workshops in San Francisco, Chicago, San Diego, Columbus, Ohio, and Pheonix City by his disciple, Bosco Seung-Chul Baek.
2005, May, he was invited to Columbus, Ohio to participate in the Asian Festival. The cover story of “Inside Kungfu” magazine featured an interview with Chen Bing “Chen for Life” in its December issue.
2006, appointed by the Wenxian County as the head trainer at the Wenxian Wushu Taijiquan School. Critics’ reviews: “achieved great success on tournaments with superb technique and integrity incorporated in both taijiquan and martial arts.”

2008, Nov, he established his school named Chen Bing Taiji Academy in Chen Village and offers the authentic Chen Taijiquan.
He also donated $14,132 to Sichuan Province for victims of the earthquake disaster.